Yamaha Set To Return to TrialGP 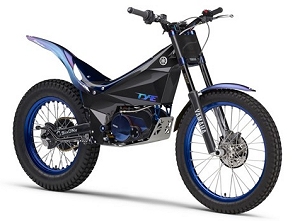 Yamaha Motor Company Japan have confirmed that they will contest the 2018 FIM TrialE Cup following the recent unveiling of their brand-new TY-E model. This revolutionary new machine will make its competitive debut at the highest level with factory Yamaha rider Kenichi Kuroyama set to contest both rounds of the now extended 2018 series aboard the battery powered bike.

The first ever FIM TrialE Cup was held over a single event last season as part of the new TrialGP series and proved a huge success with four manufacturers represented in this innovative class. Former FIM Trial World Champion Marc Colomer proved too strong for the competitive field and became the winner of the 2017 FIM TrialE Cup on a total score that was lower than all the Trial125 riders, as the petrol and battery propelled bikes competed on the same course.

2018 will see the FIM TrialE Cup contested over two events during the middle of the main campaign, with Auron, France on 14/15 July hosting the opening round of the electric series before the title will be decided a week later on 21/22 July at Comblain-au-Pont, Belgium.

Kuroyama, an eleven times national Japanese champion, made his debut in the FIM Trial World Championship way back in 1995 and was a part of the tour up until 2005 before then focusing on his home series. During his eleven years on the World stage, Kenichi achieved four GP wins and twenty-five podium places.

Kenichi's highest overall ranking was third, which he achieved in both 1997 and 1998, before an almost career ending crash at the start of 1999 saw him fall out of the top ten whilst he recovered from a nasty double wrist injury. Proving that he still has the pedigree to compete at the highest-level Kenichi placed eleventh and tenth over the two counting days of his home TrialGP at Motegi last season.

The prospect of Kuroyama going for gold, this time relying on electric power, is an exciting prospect especially as he and his TY-E machine will have to fend off a field potentially packed with similar talent and equally exotic bikes.