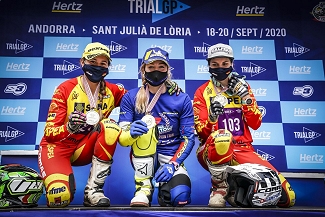 Britain’s Emma Bristow (Sherco) underlined her status as the undisputed Queen of the TrialGP Women class and Naomi Monnier (Beta) from France took the Trial2 Women crown today on day two of the Andorran TrialGP – round three of the 2020 Hertz FIM Trial World Championship – at Sant Julià.

In the premier TrialGP class defending champion Toni Bou (Repsol Honda) returned to the top step in the Pyrenees after slipping to the runner-up position yesterday, Matteo Grattarola (Beta) from Italy made another Trial2 title look a reality and Spain’s Pau Martinez (Vertigo) moved closer to the Trial125 championship with a close second behind Britain’s Ben Dignan (Vertigo).

Following yesterday’s rain, conditions were soft and slippery during the opening laps before drying out in the final stages with the steep banks and huge tree-shrouded rocks becoming increasingly grippy. Bristow was in command from the start, opening up a seven-point advantage on the first lap. Berta Abellan (Vertigo) from Spain matched her total on lap two before the British lioness eased clear on the third and final lap with her score of 29 earning her a 12-mark win from Abellan with Sandra Gomez filling the third step of the podium on 49. The result gives Bristow her seventh consecutive title with a perfect score and extends her unbeaten record to 15 points-paying events. “It feels really good,” said Bristow. “The aim was to win them all and even though I didn’t need to finish on top today my pride made me determined. I didn’t ride as well as yesterday but I’m still pleased with my performance. It’s been an intense season but I’ve been consistent so I’m very happy. The team’s been fantastic and the bike’s been amazing.”

The Trial2 Women class has been up in the air since day one with three different winners over the five days of competition leading into the final round but Monnier – fresh from her victory yesterday – ended the day on 27 to claim her third day win and assure herself of the title. “It’s been the perfect weekend for me with the win both days,” said Monnier. “It feels amazing and I was riding really well so to get the championship with two wins is amazing. It’s a great feeling.” Italy’s Andrea Rabino (Beta) was another 10 marks adrift to cement her second-placed finish in the championship and Martina Gallieni (TRRS) from Italy took third on 39 although fourth for Britain’s Alicia Robinson (Beta) was good enough for third in the championship.

Spanish superstar Bou entered the season unbeaten since round three in 2018 but has been defeated twice this year – both times by his compatriot Adam Raga (TRRS). Despite carrying an arm injury, after his second-placed finish yesterday the 33-year-old seized control on the opening lap and was never headed to win with a total of 28. Raga was next up on 48 with Jorge Casales (Gas Gas) matching his performance yesterday in third on 70. “After a hard day yesterday I think I rode my best on the second lap,” said Bou. “The conditions were difficult on the third lap but with a big advantage I felt more confident. I’m very happy with the weekend with second and first positions.” All-action Japanese veteran Takahisa Fujinami (Repsol Honda) carded his best finish of 2020 in fourth on 72, two marks ahead of Miquel Gelabert (Gas Gas) from Spain. With just two days of competition remaining, Bou now has a 10-point lead over Raga and is in pole position to take a record-breaking 14th straight title.

Grattarola, Trial2 champion in 2018, hasn’t finished off the podium this season and his double win in Andorra takes his total of victories this year to four out of six days of competition. His final score of 29 saw him come home comfortably ahead of the British pairing of Jack Peace (Sherco) who parted with 46 and Toby Martyn (TRRS) who dropped 48 and gives him a clear lead heading into the Italian TrialGP next month. “This win in very important for me,” said Grattarola. “I have ridden very well and now I’m looking forward to my home GP.”

Martinez had been dominant in the Trial125 class but has let his foot slip off the gas in Andorra. However, two second places behind Leo Guiraud (Beta) from France yesterday and Dignan today still leave him in the driving seat in the championship stakes. Dignan was delighted with his one-mark win over Martinez today as Britain’s Jack Dance (Gas Gas) slotted into third another nine marks behind on 29. “It feels surreal,” said Dignan. “I’m absolutely delighted with what I’ve done and it feels amazing. The conditions did make it feel like I was at home today but it was hard to compete with everyone and it was a close battle the whole day.”

The 2020 Hertz FIM Trial World Championship concludes on October 9-11 at the Italian TrialGP at Lazzate.