You need to be logged in to see additionnal information and be able to contact the advertiser!
THIS ADVERT HAS EXPIRED! 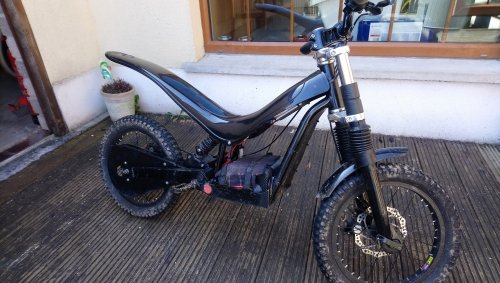 Hi, this is my son's bike which he has now outgrown (he wants to build a drift trike next!). Bought a couple of years ago it was his first electric bike and he has had lots of fun on it. When I bought the bike the plastics were in poor condition so were replaced by genuine new ones. Some parts were cleaned and painted such as the swingarm, mudguard, etc and everything is working as it should.

The original 24v lead acid batteries gave only around 15 minutes running time. These were replaced by an expensive (but worthwhile) Boost Bikes lithium 37v unit. At the same time the controller was upgraded from the standard one to a Kelly 100 Amp. These upgrades mean the bike can go for much longer time and also can be setup to run quite fast.

I found the bike would just about fit into my VW golf so we could take it to various places easily. Being electric it makes no noise so does not annoy walkers or neighbours which is a big advantage compared to pit-bikes etc. When out with it we have tended to get questions like where to buy one rather than annoyed looks.

The bike is now mostly restricted by the 40amp main fuse. A simple upgrade to a bigger relay (comes with the bike but unfitted) and a larger fuseholder would see this bike really fly. However, with the higher voltage and better range I had never felt the need to do this. Its quite easy to adjust the settings on the controller with a computer and details of the software etc will be supplied.

I am based in Bangor, Northern Ireland. I prefer collection for an item this size, but under the current circumstances will work with a winning buyer to facilitate courier transport (at buyers expense).

There are no questions to display.

This advert is now closed to further questions.