Dabill Hoping for Strong Performance At Home Round 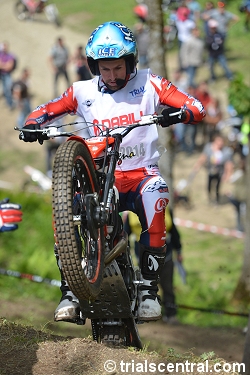 Currently sitting sixth in the general standings James Dabill – Beta has sighted this weekend’s British Trial Grand Prix, which will mark round six of the 2014 FIM Trial World Championship, as a real opportunity to repeat the podium finish that he achieved at the same venue two years ago. Back in July 2012 Dabill recorded his only top three GP finish at Nord Vue in front of his home fans. The noise and support that the now twenty-eight year old enjoyed on that day is something that the four times national champion is keen to experience again.

In the five rounds and seven counting days to date, Dabill’s best result in the 2014 series remains fifth place, a position he has reached on three occasions this year, twice at the opening round in Australia and also in Italy. In contrast James’ worst two performances during the current campaign were in Japan and Corsica where he placed tenth and seventh respectively. Yesterday the factory Beta rider ended up sixth in the very British like conditions at a wet and slippery Belgian GP.

Speaking ahead of his important homecoming Dabill said. “Obviously I am really looking forward to the British GP, you always do, there is no better feeling than riding in front of your home fans. That said I also have some mixed feelings too, as I would like to have been on the podium in another country before now. I don’t want to just rely on my home round being the only place where I can be in the top three. My goal this year is to match what I did at Nord Vue two years ago, but on foreign soil this time.”

“It goes without saying that I will be going all out to be on the podium again at Penrith, as at your home GP you have that extra bit of confidence which the crowd gives you with the noise they make in each of the sections. Overall I have been happy with the way things have been going during the last two seasons. I know I am still sixth in the championship, but I feel comfortable to be there and feel that I am now closer than ever to the top five.” 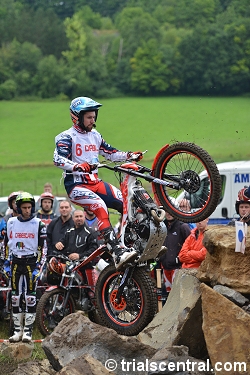 Dabill continued. “The top five guys are incredibly strong and you can not afford to make any mistakes if you want to be in and amongst them. I believe that I have now made the top five into a top six and that is now the level the other riders are trying to break into.”

“Penrith always offers something different. I don’t mind the sections, yes they are man made but that almost suits me better. I hope that they have mixed it up again for this year and that we will have some new challenges that will be good both for the riders and the fans. I have heard that they have had a digger in the quarry, so it will be interesting to see what work they have done.”

“The British are so good at getting behind the home riders, when Dougie (Lampkin) was at the top they cheered him on every inch of the way and I think both with me being capable of a podium finish and the other Brits all fighting for their best results of the year you get an amazing atmosphere.”

James rounded off by saying. “It will be my son Archie’s first ever GP since he was born just a few weeks ago, so it is going to be even more exciting than usual. He came with us to the Tour de France and was OK with all the noise so I am sure he is going to love the Trial too. Being on the podium again would be brilliant, but I have to say that being a dad is absolutely awesome and even better than I ever expected.”