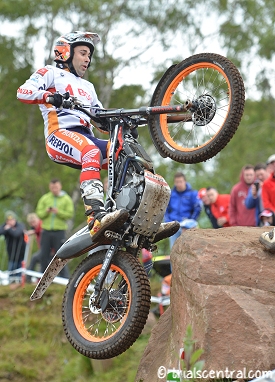 Whilst Toni Bou – Repsol Honda had to fight hard for yesterday’s win, today it was a very different story as the reigning champion romped to an easy and emphatic victory to extend his unbeaten run to eight Trials in a row. On the second day of the British Grand Prix held at Nord Vue that marked a close to round four of the 2015 FIM Trial World Championship, Bou sealed his latest success by the massive margin of thirty marks. Although Adam Raga – Gas Gas had been able to keep close to Toni twenty four hours earlier, today he simply had no answer to Bou’s supremacy, but was still more than worthy of his clear runner’s up placing. Jeroni Fajardo – Beta returned to the podium to complete an all Spanish top three, but way behind the pace of the Bou and Raga.

Rain marked the start to Sunday’s Trial, with revisions being made to four of the sections to allow for the ever changing weather conditions. The hazards were at their most slippery on the opening lap and this reflected in the scores of all except Bou who finished his first tour for the loss of a mere ten marks. Raga was next best at this point some fourteen marks back. Already the writing was on the wall and Toni’s victory was never in doubt going forward, the only question was, what would be the size of his victory come the finish?

Over the following two laps Raga fought a lonely battle to at least keep the gap between himself and Bou respectable whilst never being under pressure for his eventual runner’s up placing. It was Albert Cabestany – Sherco who was in third spot after the initial twelve sections, but he was to fade as the Trial wore on allowing Fajardo to claim the last rostrum place on day two.

Jaime Busto – Repsol Honda never really found his recent form on the sometimes greasy sections and again had to be content with rounding out the top five for the second day running.

With the rain having stopped after lap one, the rocky quarry based hazards began to dry which saw the riders reduce their scores over the closing two laps. Takahisa Fujinami – Repsol Honda and James Dabill – Vertigo were just two riders who greatly benefited from the change in weather as they both recorded much lower laps totals on their second and third tours to finish the day sixth and seventh respectively. France’s Alexandre Ferrer – Sherco, who will now look forward to his home GP next, took eighth position whilst Eddie Karlsson – Montesa and Franz Kadlec – Beta closed out today’s top ten. Bou remains unbeaten at the Nord Vue venue and has now extended his lead in the series standings to thirty four points over Raga. Fajardo, Cabestany and Fujinami currently sit third, fourth and fifth respectively in the general standings.

Almost Bou-like and rounding off an incredible weekend, Iwan Roberts – Beta made it back-to-back wins in the FIM World Cup as he held his nerve brilliantly to claim his second victory at his home GP. Roberts took the lead on lap one and then delivered two further solid performances to narrowly defeat his fellow countryman, Billy 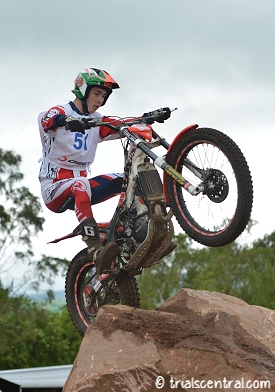 Bolt – Scorpa by five marks. This was Robert’s third win of the series and Bolt’s first podium finish since the Czech Republic. Yesterday’s runner up Arnau Farre – Gas Gas completed today’s FIM World Cup rostrum with the Spanish rider finishing a further four marks back from Bolt. Despite only managing sixth on the day Quentin Carles de Caudemberg – Beta remains the leader of the general standings four points ahead of Miquel Gelabert – Sherco. Jack Price Gas Gas who placed fourth today continues to hold third in the series with Roberts having now moved into fourth position in the series even having missed the Japanese GP.

In very much a repeat of yesterday’s dominant performance it was again Marco Fioletti – Beta who was a clear and comfortable winner in the FIM 125 Cup. With lap scores of ten, seventeen and eleven over the three laps respectively, the Italian rider’s total of thirty-eight was some thirty-one marks better than his nearest challenger Maxime Varin – Scorpa who took the runner’s up spot for the second day in a row. Completing a great debut weekend Sam Johnson – Beta again claimed third spot on home soil to close out a carbon copy of yesterday’s podium. Fioletti has further increased his lead in the general standings to thirty-three points over Varin.

After three GPs in the last three weeks, the 2015 FIM Trial World Championship now pauses briefly before resuming in Andon, France on 27-28th June for the fifth round of the current series.