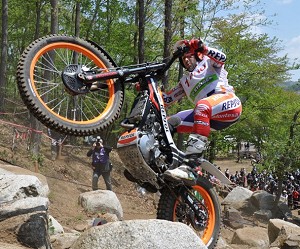 Toni Bou goes home from the world championship opener in Motegi with two victories clinched and 40 points in the bag. Two resounding triumphs with a display of class and dexterity show the Repsol Honda Team rider remains the competitor to beat. Bou commenced the second, slightly more complicated day of the Japanese GP commanding the field from obstacle one and entrenching himself in the top-spot throughout the entire three laps of the twelve-section course.

Toni Bou raised his game considerably for the second day at the Motegi circuit allowing him a more laid-back competition. Picking up seven points on the first lap gave the Spaniard a fourteen point advantage over the nearest rival, a cushion which served well on the second lap which saw Bou unexpectedly score a couple of faults. By lap three the Honda maestro was once again displaying excellent form, riding on to yet another triumph. Bou, cruising eight points clear at the top of the leader-board now also holds the record for wins in the Japanese GP having taken top honours on twelve occasions.

Repsol Honda Team team-mate Takahisa Fujinami had a fearless day out in front of the home crowd finishing second and proving the injured right knee is well and truly recovered. Astride the Montesa Cota 4RT, the popular Japanese rider improved throughout the event before putting in an equally high-level final lap that placed him alongside companion Bou on the final rostrum. Fujinami lies in third in the general rankings.

Rookie Jaime Busto wound up his first Grand Prix in the World Pro category with a hard-fought sixth place, which will go down as the best ever start for a novice in the competition’s history. Repsol Honda Team’s prodigy is sixth in the overall standings.

The second GP of the world championship season will take place in Sokolov in the Czech Republic on May 30 and 31.