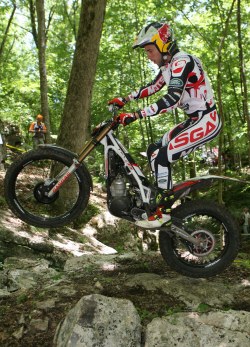 Adam Raga – Gas Gas claimed a clear win on the opening day of the US Trial Grand Prix to earn himself the title of Captain America, as he finished eight marks clear of Toni Bou – Repsol Montesa in what was a relatively low scoring event. Jeroni Fajardo – Beta ensured that it was an all-Spanish podium as he edged out his compatriot Albert Cabestany – Sherco to take third spot on the day. Raga scored his first every GP victory on US soil back in 2001 and once again confirm his liking for competing Stateside as he moved within two points of Bou in the title race with the second round of the 2013 FIM Trial World Championship only halfway completed.

Good weather throughout the latter part of the week, and into today meant that conditions out on the course were relatively dry as the sun continued to shine throughout proceedings. Carrying on with the form he showed in Japan Fajardo made the early running and only lost marks in three of the twelve sections on the opening lap to arrive as the early leader on an interim total of five. However like his two closet challengers Bou and Raga, who both dropped seven marks on their initial lap, Fajardo also lost an extra mark on time as they paid the penalty for a slow start to the Trial.

Raga was to come into his own on the second lap as he remained feet up through all the hazards to carve out a clear advantage over the chasing pack, although Bou at this stage was still in contention as he lost single dabs in sections three, five and eleven. By this stage the eventual rostrum finishers were already starting to book their places in the top three as Cabestany lost ground, with him being the last remaining threat to the leading trio. Away from the absolute front-runners Takahisa Fujinami – Repsol Montesa and James Dabill – Beta were in their own fight for the final top five placing. 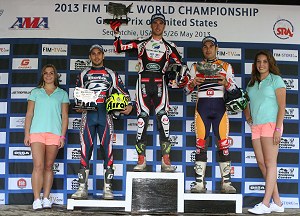 ever-popular Japanese rider would finally triumph in this duel, as both he and Dabill finished a considerable distance behind the leading four riders. Cabestany could do nothing other than consolidate his safe fourth place, as his other three countrymen evicted him from the podium battle. Raga held his concentration and nerve brilliantly to record a well deserved win, his first of the new season, whilst Bou did just enough to hold on to the runners up spot. Thanks to his third position today Fajardo has now moved to within one point of Fujinami in the general standings and could move up to third in the series if he can make it on to the podium again tomorrow.

Jack Sheppard – Beta was once again the winner in the Junior class, but only just as a mere two marks spilt the top three riders. Sheppard’s win was earned through his sheer consistency as he posted lap totals of four, three and three to end his day on ten marks. Runner up Francesc Moret – Gas Gas and third placed rider Jorge Casales – Gas Gas actually posted the best two closing rides, as they each only dropped three marks apiece for laps two and three combined, but lost out to Sheppard as they both failed to match the British rider over the opening twelve sections. Jack is now twelve points clear of Casales in the championship table after three counting days.

Quentin Carles de Caudemberg – Beta now heads the Youth general standings after he clinched his first win of the 2013 campaign today. The young French rider enjoyed a relatively easy win over his challengers as he came home seven marks clear of his closest rivals. Behind him things were much tighter with three riders all tied on eighteen marks. Bradley Cox – Beta was to come off best in the three-way tie-break to claim the runners up spot from Gabriele Giarba – Beta who took the last podium place. Martin Matejicek – Gas Gas was cruelly demoted to fourth as the ultimate loser in this process. Previous class leader Kenny Thomas – Beta finished in sixth place today.

For photos from day 1 of the action in the USA, click here