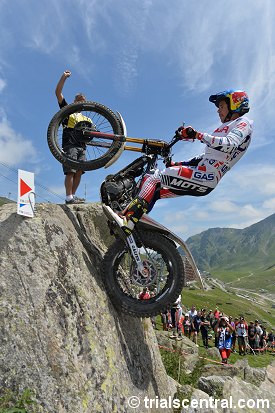 Adam Raga – Gas Gas stole the narrowest of wins at today’s French Grand Prix held at the ski resort of La Mongie to take the fight for the 2014 FIM Trial World Championship to the wire. Raga defeated current series leader Toni Bou – Repsol Honda by three minutes and eighteen seconds after the arch rivals could not be separated by any means other than the overall time taken by each rider to complete today’s event. Adam, having completed the Trial in the faster time. Both Raga and Bou finished on two marks, with the same number of cleans, ones, twos, threes and fives, after three laps of twelve sections out on the mountain course. Bou will now take a seven point advantage to his home GP in just over a month’s time, when he will hope to keep Raga at bay as he looks to seal a record breaking eighth straight title.

Jeroni Fajardo – Beta followed up the third place he scored at the last round in Great Britain with another podium placing, his fourth of the season to date. Fajardo’s return to form sees him move into fourth spot and now above Takahisa Fujinami – Repsol Honda in the general standings after the Japanese rider slumped to sixth spot today. Jeroni ended the day on thirteen marks, nine in front of Albert Cabestany – Sherco who with his fourth position failed to make it onto the rostrum for the second time in a row. Jorge Casales – Gas Gas rounded out the top five as he looked far more confident on the dry rocks than he had in the wetter conditions of the two previous events.

France’s highest placed rider in the World Pro class was Alexandre Ferrer – Sherco in seventh, who saw off Pol Tarres – Sherco and Matteo Grattarola – Gas Gas by a good margin as this Spanish / Italian pairing finished eighth and ninth respectively. James Dabill – Beta suffered his equal worst result of the 2014 campaign to date as he placed tenth after he complained throughout the day about his bike lacking power due to the high altitude venue.

The fierce looking boulder fields on the grassy hillsides above the town where all the majority of the sections were located actually rode far easier than expected, which resulted in low scoring and nervous battles in all three classes. Bou was far from pleased with the lack of severity, and made his thoughts known at the finish. 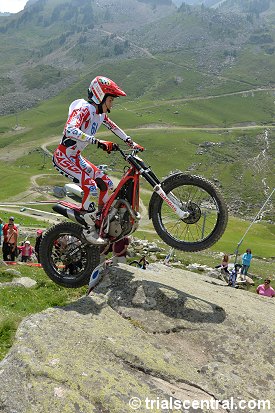 Spain’s Arnau Farre – Gas Gas was a shock winner in FIM Trial World Cup category today. Having only scored championship points at two previous rounds so far this season, Farre was an unlikely victor in a low scoring and tight fight at the top end of this class. Arnau eventually edged out his compatriot and overall championship leader Jaime Busto – Beta by a single mark after three tense laps of competition. On a day of firsts, Britain’s Jack Price – Gas Gas recorded his first podium placing as he came home on seven marks, the same total as Busto, but lost out on a most cleans tie-break having notched up three less faultless rides than his Spanish rival. With Franz Kadlec – Beta finishing down in fifth, having missed out on the win by a mere two marks, Busto now heads the general standings by fourteen points with just his home GP remaining.

With the 2014 FIM 125 Trial Cup already won by Gael Chatagno – Sherco who rode up in the FIM Trial World Cup class today where he finished seventeenth, the path was clear for a new winner. His French compatriot Teo Colairo – Gas Gas duly stepped up to the challenge to record his victory of the campaign and on home soil. Colairo’s victory means he has now also secured the runners up spot in the series with two counting days still to go. Thomas Minta – Sherco made it three-second places from three starts, but was disappointed not to have gone one better today after he was the early leader with a clean opening lap. Switzerland’s Noe Pretalli – JTG completed today’s podium to seal third spot in the 2014 rankings ahead of the final round in Spain, which will play out in early September.

Trials Central Supporters Photo Coverage (182) - High resolution, no watermarks and will not be seen elsewehere.