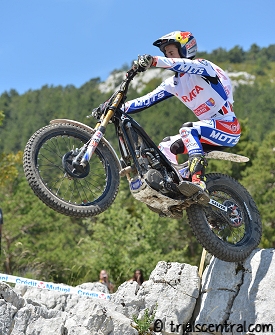 This weekend at the French Grand Prix, the 2015 FIM Trial World Championship will reach its fifth round of nine, with no one thus far having been able to stop reigning champion Toni Bou – Repsol Honda in his tracks. Bou heads the general standings by a healthy and almost worrying thirty-four points before the series has even reached its halfway stage. Toni’s uninterrupted tally of one hundred and sixty points reflects perfectly his total domination of the 2015 campaign to date, with him having taken eight wins from eight starts.

Last year Sant Julia de Loria hosted the FIM Trial des Nations team event, and it was in 2013 when the FIM Trial World Championship last took place in this mountainous area. On that occasion Raga and Bou shared the spoils, both winning one-day apiece over the two days of competition. A quick count back shows that these two Spanish protagonists both currently have recorded three victories in the small principality during their careers, a feat they share with their fellow countryman Albert Cabestany – Sherco.

Given these previous results, it would suggest that these three riders are again sure to feature amongst the front-runners this coming weekend. Jeroni Fajardo – Beta will also want to add his name to this mix having also won his only ever Trial GP in Andorra back in 2009. Behind Bou and Raga in the general standings, an interesting fight for the remaining overall podium place is starting to develop between Fajardo, Cabestany and Takahisa Fujinami – Repsol Honda. Fujinami actually moved ahead of Cabestany by a single point in the championship table after his strong showing in France last weekend. The fighting spirit of the veteran Japanese warrior has to be applauded following his on going recovery from his long-term knee injury.

FIM Trial World Championship rookie Jaime Busto – Repsol Honda heads up the next group of riders who are all desperately looking to break into that elite top five that continues to be occupied on most occasions by the pre-mentioned established names. Busto is more than capable of a podium finish on his day, but knows he needs to develop more consistency in his approach if he is going to threaten the higher order. Both Alexandre Ferrer – Sherco and Eddie Karlsson – Montesa faired better than James Dabill – Vertigo last time out, with all three possible of a top five placing if they ride to their potential. Dabill will hope that an extra high altitude test this week will give his all new Combat machine the power it needs to challenge his World Pro rivals in the mountains this weekend.

Back-to-back wins at his home GP last weekend means that championship leader Quentin Carles de Caudemberg – Beta is once again the man to beat in the FIM Trial World Cup as the series moves on to Andorra. Predicting who will be his closest challengers is far less clear as this category continues to be hotly contested by a number of leading riders who are all potential winners and podium finishers at least depending on their performance on any given day. Oriol Noguera – Honda, Miquel Gelabert – Sherco, Iwan Roberts – Beta, Arnau Farre – Gas Gas, Jack Price – Gas Gas, Benoit Bincaz – Scorpa and Billy Bolt – Scorpa are the names that make up this incredible and highly exciting chasing pack.

Things are far more clear-cut in the FIM 125 Cup where Italian run away series leader Marco Fioletti – Beta continues to stamp his authority on this division. In reality he only has two serious challengers and they come in the form of France’s Maxime Varin – Scorpa, who remains second in the series standings and more recently Germany’s rookie Jarmo Robrahn – Beta both of whom are regular podium finishers as they are likely to be again in Andorra this coming weekend.