Repsol Honda Team On Day One In Andorra 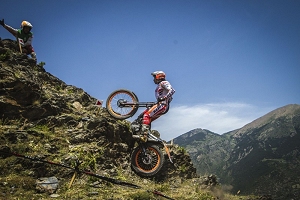 After a look over the sections on Friday, Toni Bou correctly speculated that Saturday’s race would be decided by a minimal margin due to simplicity of sections. He hit the nail on the head. After holding the lead – in a very tense trial thanks to the closeness on the scoreboard – a final disastrous round on the Montesa Cota 4RT, with two consecutive five-point faults, ruled out the chance of victory for Bou. Toni had finished the first lap with two marks and six on the second (including a fault in section eight) which left the Spaniard at the head of the table. The eleven marks of the final lap relegated the champion to second position some four points behind Adam Raga, the day’s eventual winner.

Toni Bou does, however, maintain a great margin at the top of the general rankings, 31 points ahead of second-place Raga.

Second for of the Repsol Honda Team squad today was rookie Jaime Busto, taking sixth place after a somewhat irregular trial which saw him score well on the second lap, but pick up too many marks on an error-filled final lap.

Takahisa Fujinami was ill-at-ease in the high-altitude sections and struggled to find the form in certain zones that he had demonstrated in previous outings. At one point in the battle for fifth place, the Japanese rider ended up in eighth overall after a disaster start of the last lap.

Sunday, fans can look forward to the second and final day in Andorra, the sixth GP of the season, where riders will once more complete three laps of the twelve kilometre circuit in Sant Julià de Lòria. The organization has already announced changes to some of the twelve sections to make the route more demanding.