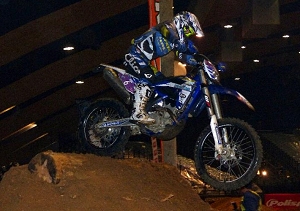 Sherco MRS rider Emma Bristow took her first world title last weekend at the Super Enduro in France. This is an amazing achievement considering it is her first year competing in indoor Enduro and a true testament to her dedication and commitment as a rider.

Emma first approached MRS before Liverpool saying she 'fancied a go at the Extreme Enduro in Liverpool' as she was having a break from her trials training after a long season.  We were fully behind the 'experiment' and went to Liverpool organised but certainly not expecting the result she managed to achieve. She certainly surprised everyone, including herself, finishing a close second to Laia Sanz and when she set off to Poland she felt the pressure a little and was very disappointed coming fourth. She was absolutely gutted with this result and felt she had to go to France to try to redeem herself. She re-grouped herself and set off to France with a fully prepared biked but with an understanding to relax and enjoy it in the same way she approached Liverpool and it certainly paid off for her.

She took the win after a very hard and close fought race and when series leader Jane Daniels took a fall and was overtaken by Sandra Gomez Emma had to focus and keep relaxed and committed in much the same way she applies herself riding trials. She brought home the win and the World Championship title and was absolutely delighted and overawed by the whole experience. 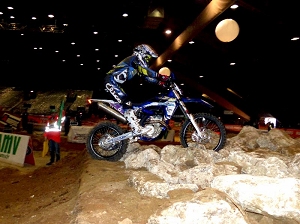 Emma quoted 'I can't believe I am actually World Champion, especially after my ride in Poland! I am absolutely delighted to bring this title to Sherco and to all at MRS who were totally behind my efforts to try out Enduro. I would like to give a special thank you to Wayne Braybrook for preparing my MRS Sherco and the 250 4T absolutely suited my style and the terrain. After a hard fought race I just couldn't believe I was actually World Champion. It still hasn't sunk in properly yet but I know I can build on the experiences from this season and improve even more next year. I am now concentrating my efforts on bringing home the World Trials Championship and after dropping off the Enduro bike at MRS, I will be heading for Scarborough for some hard trials practice. It is undoubtedly a big boost for me to be World Champion and I am sure I can take this experience with me to achieve all my ambitions for 2014.'