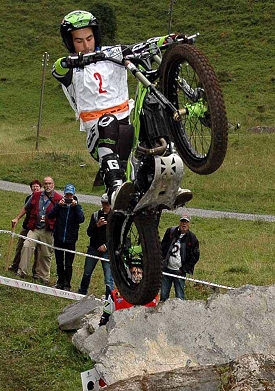 Francesc Moret in action in Switzerland.
Image: phototrial.it
Francesc Moret riding his prototype Vertigo Combat rounded out the 2015 European Trial Championship with a third place at the final round of the series held at Grimmialp, Switzerland to become vice champion in the overall standings. Moret went into the last counting event tied at the head of the points table thanks to his victory in Belgium just last weekend, but was unable to repeat his triumph and had to concede the title to his Italian rival Gian Luca Tournour who took the victory at the final round.

Twenty-four-year-old Moret who has played his role much behind the scenes in terms of developing the prototype Combat alongside fellow factory riders James Dabill and Dougie Lampkin has been a strong contender through out this season's Euro series and has never placed off the podium over the five counting events. Moreover Moret has recorded two wins during the campaign that started in Italy back in April before then taking in a further two rounds again in Italy, ahead of the closing pair of competitions over the last two weekends in Belgium and Switzerland.

The Trial in Grimmialp proved to be a slippery and nervous affair as Francesc looked to close in on the brand's first international championship to add to the maiden national title gained in Britain recently by Dabill. Riding behind his main rival Tournour during the decisive competition Moret started to feel the pressure as the Italian rider set the pace up front with some exceptionally strong riding during the opening lap of fifteen sections that were ridden twice on the day.

With Tournour holding the lead on twelve marks on lap one, Moret had much work to do as he recorded an interim tally of twenty-six to put him in third place as the main championship contenders were split by Iwan Roberts with a score of twenty-one marks. Tournour allowed no way back for the young Spanish rider as he closed with a second lap score of just thirteen marks to take the round win and the title. Francesc battled hard to keep his place on the podium on the day and to seal the vice champion position in the championship in the first season of competition for the all-new Vertigo Combat.

Congratulating Moret on his performance in the 2015 European Trial Championship Vertigo Sports Team Manager Dougie Lampkin said. "I know right now Francesc will be feel slightly disappointed on being so close to winning the title, but he should be proud of himself and what he has achieved this year. To end the year as runner-up in this fiercely fought international series is an amazing result for him, the bike and the whole team."

"Francesc has worked so hard this year, much of the work he has done in terms of assisting with developing the Combat has gone unseen by the public and the media, but his role within the factory and the team has certainly not gone unnoticed. There is no doubt in my mind he has been an important part of the success that the prototype Combat has achieved to date, be that James' recent British Championship victory, my SSDT win or Francesc' own best ever Trial GP result in Andorra and not forgetting what he has done himself in the European series."

Dougie ended by saying. "So it is a massive well done to Francesc and the rest of the Vertigo team."

Speaking after the event Moret remarked. "To be so near, but to be so far is very frustrating and disappointing but it happened that way. I was unfortunately not able to repeat the same performance as I did in Belgium last weekend, but perhaps that was due to the pressure of the situation. I must congratulate Gian Luca as he rode well today and I would like to thank the Vertigo family for their great support. Overall, although it does not feel it right now, being vice champion is still a good result both for me and the Vertigo Combat."