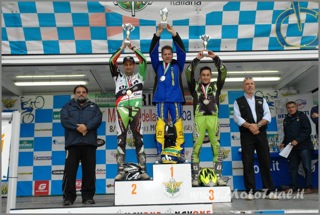 OSSA’s Pilots monopolized the podium at the fourth round of the Italian championship trial which took place this weekend, divided into two categories: Outdoor and Marathon.

These results are even more impressive considering the difficult conditions of the competition, organized by Della Superba motorcycle club. First because it was very difficult to finish on time. To finish out of time meant disqualification, which was the case for half of the participants. Also, the weather was unfavourable, which added extra difficulty to the competition.

Nevertheless, the team OSSA showed his brilliant ability to adapt to harsh conditions. In the category TR1 Daniele Maurino won first place, which allowed him to win the Marathon. Matteo Poli  in TR1 arrived to third place.

Daniele Tosini (TR3) was also second and Valerio Codega was on fifth place.

As for the category TR40V40, Angelo Piu finished in second place on the podium.

Riccardo Cattaeno, Alberto Scalenghe, Catalin Ismael and John Pizzini failed to get in time despite their good performances.