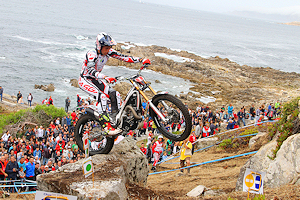 The Spanish National Trial series has returned to the agenda of the Gas Gas riders and the Trial of Baiona, the penultimate event on the calendar, resulted in good results for the athletes of the Girona brand.

The race course was very short, about 600 meters, as the trial was located in a spectacular location, with zones close to the sea, some entirely of rock and others with some soil. Rain the night before, which did not end until mid-race, complicated the progression of the riders within the zones, and the organizing club was forced to change the layout of some of the sections.

Adam Raga, in the top class, suffered the disadvantage of opening the zones. Some of his chosen lines were copied by his rivals and in some cases improved, so that the Gas Gas rider had to go on the defensive with his TXT Pro 300 Factory Racing.

However, after the first of the two laps of the course, he had submitted the second best score after Toni Bou, and having not made any mistakes in the last of the twelve zones on the second pass, preserved his second position. Finally, Raga finished in third place but remains second in the provisional championship with only one race remaining in TR1.

The young rider and member of the Gas Gas School of Champions, Jorge Casales, held an excellent fifth place with his 2014 TXT Pro 300 Racing. Francesc Moret and Pere Borrellas finished tied on points, in seventh and eighth place, while Jesús Martin, also with a Gas Gas,  was in ninth position.

Winning for Gas Gas in the other categories, Junior, Cadet, and TR4 were in the hands of Nacho Fernández-Sancho, Gabriel Marcelli and Jesús Fuentes, respectively.

The final round of the Spanish Championship will be held at población barcelonesa de Cal Rosal on November 17th.

Adam Raga “I can say that the trial has gone well for one reason: I was the first man out, and opening the zones was quite difficult. For this reason, I was seen by the field, I can say I have not done poorly, and finishing third is a good result. I've done some more footing, but the score was not bad. The bike, as always, has worked very well. Everything went perfectly: the bike, the minder and all the team".

Jorge Casales "I am very happy with the result. In this trial I raced with a lot of pressure, because I was at home and with all the people cheering me on and supporting me, it was more difficult to do well and not to disappoint. Also, my main rival had been making things difficult in the World Championship and I did not know if he would continue in the National Series. The controls also have supported me being in my home, so the result is real and that's why I'm also happy. The rest, also super-good: the team, the bike, my mechanic Gregori, and my minder David Darnés. The bike is getting better and I'm very happy, I'm very suited to it."