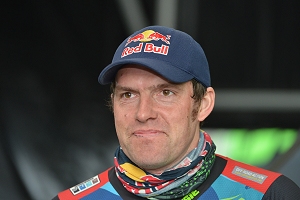 Dougie Lampkin - Vertigo used the occasion of the Three days of Santigosa Trial as an important part of the final phase of his preparations, with the Red Bull athlete soon to bid for an unprecedented eleventh win at the forthcoming Scottish Six Days Trial (SSDT). The former twelve time FIM Trial World Champion rolled back the years as he finished fifth place overall at the traditional Spring Spanish event in a field of two hundred riders that was packed with the current crop of World title challengers.

Forty-one-year-old Lampkin showed he has lost none of his determination or desire, nor his ability to mix it with the best, with a solid performance over the three long days of competition to end just a single mark off the runners-up spot. Lampkin was disappointed to have not managed to record a top four placing after he lost out on a most cleans tie break with current World number six Jaime Busto who is less than half Dougie's age.

In an event eventually won by Lampkin's old World championship rival Takahisa Fujinami who was ranked third in the World last season, Dougie immediately showed he was up for the fight as he rode his way into an initial fifth position on the opening day with the loss of just four marks. The Vertigo ambassador parted with four single dabs over the closing four sections on day one that was made up of thirty-one hazards, which was the case on all three days of competition.

Heavy overnight rain and an early starting position on day two meant Dougie was going to be at his best if he was to remain in contention in amongst such fierce and proven opposition. Lampkin showed his pedigree and experience to record a second day tally of seven marks that included one failure at a near impossible section during the early part of the day. Confirming the level of his riding, Dougie went into the third and final day holding an interim third spot, six marks behind Fujinami and tied on eleven marks with factory Beta rider Jorge Casales.

Despite only adding a further three marks to his total Dougie was to come off worst in a four-way scrap for the runners-up spot behind Fujinami on the final day. Lampkin's grand tally of fourteen marks over the three days and ninety-three sections was to leave him one mark away from second place and a podium position as both Oriol Noguera and Busto overhauled in the closing stages. Although slightly frustrated at slipping down the order so close to the finish Lampkin was still pleased with his overall performance.

"I only really came here as a final shakedown before the Scottish, to make sure that both me and the bike were in good shape before we head up to Fort William in a couple of week's time. But as always it is impossible just to ride, because as soon as you are back inside the paddock you want to win again." said Lampkin with a smile on his face.

The long serving Red Bull athlete added. "The guys I have been battling with are riding every week and at the highest level and are all capable of winning at the World Championship, unlike me whose last outing was at a local club trial and last serious competition was back in October last year."

Lampkin ended by saying. "It's been a great event again, and has been three long days of riding with some good sections, which has been ideal just ahead of the Scottish. My bike feels strong and I feel in good shape too and am happy with the way I am riding especially under a bit of pressure. All in all, its job done and we are now ready to move on to Scotland and to try and fight for the win again."