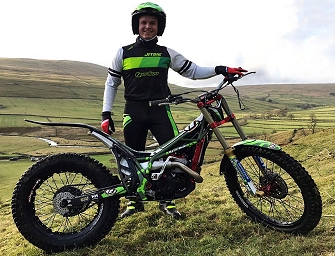 With the support of the Vertigo factory, Vertigo UK is delighted to announce the recent signing of reigning British Trial Champion Jack Price on a two-year agreement that will run until the end of 2021.

Twenty-two-year-old Price will embark on a full campaign during 2020 both at World and national level on board his new Vertigo Vertical 300, which he is currently familiarising himself with out in Spain ahead of his first competitive outing back on home soil at the opening round of the British Trial Championship on 7th March.

Jack will prioritise the defence of his UK title and will look to add a third national crown to his palmares by contesting all eight rounds of the domestic series, which kicks off in just over six weeks-time and runs through to mid-August. The Yorkshire born rider will also compete in the Scottish Six Days Trial (SSDT) in May and the Scott Time and Observation Trial in October along with other selected home-based events where his international schedule will allow.

Ranked tenth overall in the blue-ribbon class of TrialGP last season, Price will look to move up the order this time around by challenging the more established names over the seven rounds of FIM Trial World Championship that will visit Japan again plus the other usual European countries. The 2020 series gets underway in the Czech Republic in late May and concludes come early September at TrialGP Spain.

Speaking about his recent change of machinery Price explained. “Firstly, I would like to thank both John Shirt and Gas Gas for their loyal support over so many years. The switch has come at the perfect time for me and has given me some extra motivation going into the new season. Obviously, the Vertigo bike has proven itself at the highest level, so there was no doubt in my mind that the change was right for me. It’s obviously going to take me a bit of time to get used to the new bike, after so long on another brand, but I will be putting all the hours of practice necessary both in Spain and back in the UK to make sure I get the results I know I can this year.”

“With James Dabill riding the entire British Championship this season, defending my title is going to be tough, but is something I need to do if I am going to make the progress I want to. Obviously having Dougie (Lampkin) in my corner will be a big benefit, but I’m not sure how happy he will be after I beat him at this year’s SSDT!” Said Jack.

Adding his own words Dougie Lampkin stated. “It is absolutely fantastic for Vertigo and especially Vertigo UK to have Jack on board. He is a great lad who we know well, he has a great following and always presents himself in a really professional way and most importantly he is from Yorkshire!”

Dougie rounded off by saying: “Despite his previous success, I don’t believe we have seen the best of Jack yet, and I hope we can give him the support and machinery to help him take the next step up the ladder. We are really excited to see him on the bike and to see how he goes in green. Finally, I would like to say thanks to John Shirt for his kind understanding and to my sponsors who have stepped in to help make this deal happen.”