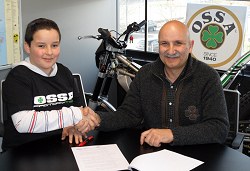 The Ossa Factory is continuing with its policy to support emerging new talent in the trial market in Spain.

The factory have announced the signing of a one-year contract with Martín Riobo Hermelo. Martín, a ten-year-old from Galicia has already achieved several podiums in the Spanish, Galician and Portuguese trial and motocross championships. Martín will participate in the championship from Spain, Portugal and Galicia with the new Ossa TR125i, from which highlighted its lightness, easy driving and powerful fuel-injected-engine. In addition, Martín and his environment, are studying the possibility to take part in the European Championship.