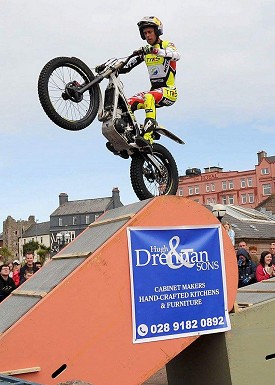 This Easter Monday and Tuesday the Moto Trial NI team along with the Ards and Northdown borough council really pushed the boat out, both at their annual arena trial as part of the family fun carnival in Bangor, County Down, Northern Ireland, and with a trials school on the Tuesday at the home of Trials at Whitespots Trial Park, just outside Newtownards.

This was the fourth year the club were asked to put on the trials display and this year course builder, Andy Perry decided to "go BIG or go home!"

Not only had he designed some massive new sections to test the top six local riders, but he also secured the attendance of top English rider Jono JR Richardson, and none other than multiple world champion and current world no. 2 Adam "The Destroyer" Raga!!!!!!

The format this year was ten sections, some using rocks and trees, others made up of concrete, steel and wood all designed by Andy. These were ridden twice, once in each direction, and there was also the usual lane race too, riders jumping off containers and riding over large concrete blocks, pipes and even pianos!!

The large crowds that gathered in the arena got to meet and greet the riders beforehand and get some posters signed. The youngest rider competing was Josh Hanlon at 16 in his first proper big time arena event, and he certainly showed he has massive potential as he was the only rider to match Adam with a clean on the last section of lap two!!

Then it was into the action, the first section being a massive tree trunk section built around a tipper lorry.  The sections were all striking in their own way, but the one the crowds loved best was the local Ards and North Down Borough Council (The hosts) section.  The theme of this one was local landmarks and Andy had constructed replicas of the legendary Harland & Wolff cranes that tower over Belfast, the Giants causeway, and the Carrick-a-rede rope bridge. This was also the hardest section as the top of the cranes was only 4" wide!!

It was an epic day all round and Adam really enjoyed himself competing, and putting on some displays for the gathered masses between the laps, and at the end of the event! He was "amazed" by the wit and banter of the compere of the event, the enigmatic Andy "El Hig" Higgins, not too sure he will have met or is likely too soon meet a star was wonders our own Hig!!

So, once the arena was cleared, there were a few hours left of the evening which Adam spent with local fans for more pictures and autographs, before a few hours sleep and up early for the trials school.

On Tuesday at 9a.m. at the home of Trials, Whitespots Trial Park, twenty riders of all age and abilities, and on all manner of bikes, from Oset electric bikes to brand new up to date factory replicas, as well as a Marty Drennan on his beautiful James, and Neil McKenzie on his blue Bultaco.  Neill actually won his place at the school the previous day at the arena trial when his ticket was picked out of the charity ballot!  Almost £200  was raised for a local charity by the ballot, thank you to all who donated.

Adam spent time with every rider, watching their style, giving hints, tips and encouragement. All the riders took something from the day and will no doubt keep Adam's words of advice to mind when out on their bikes.

There was a question and answer session with Adam where the riders and the gathered mass of spectators could put questions to him, and he had one very resounding comment which really hit home for Moto Trial NI as a club.  It took us over three years of hard work, sweat and graft to get our local council to establish a fully planned bespoke trials practice area at Whitespots, where trials had been competing for over 80 years.  They saw our vision and we now have the only legal trials practice area on the island of Ireland where riders can practice without the worry of being chased off or prosecuted.

Adam said that this was something that everyone associated with trials could be helping with.  It seems this is a worldwide problem and he believes that it needs addressed as trials are unique as they do minimal damage both to the land and environment, and provide so much for so many including families as all could get enjoyment from riding.

The day was rounded off by Adam who put on a wonderful display of his talent by riding up some crazy steps and climbs in the Bear Pit practice area.

There are hundreds of pictures and videos of the two days action on the Moto Trial NI Facebook page with more to follow over the coming days.

Thanks to all who made this happen, photos thanks to Trevor Armstrong, Gary Smallwood, and Marty Coney.

But most of all, a special thanks to the absolute gentleman that is Adam Raga