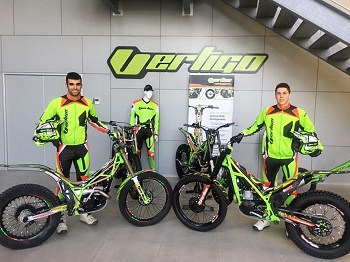 Arnau Farre (R) joins Jorge Casales in the Vertigo Factory TeamVertigo Motors are pleased to announce that young Spanish rider, Arnau Farré has inked a deal to ride with the marque for the next two seasons. The reigning European Champion will join the factory team and is set to contest the TrialGP World Championship, the FIM X-Trial, the RFME Spanish Championship and also the British Trials Championship at the helm of the Vertigo Vandal.

Considered one of the rising stars of Trial, Farré at the young age of 19 has already achieved four Spanish Championships (Junior 80cc, Junior 125cc, Cadet and Youth). On his first year competing in the premier class of the TrialGP Series Farré ended the season in 12th place, with the 8th position achieved in Andorra his best result.

With his signing Vertigo will have acquired one of the most talented and skilled upcoming riders in the sport, a fact that confirms Vertigo's commitment to the young riders. Along with Jorge Casales, Farre will provide a great line up with plenty of talent and quality and sets the team up to achieve great results in every race.

Vertigo are also delighted that Dougie Lampkin has extended his relationship with the brand until 2019. Currently acting as brand's ambassador, team manager and developer, Lampkin will continue at the forefront of the racing project, where Vertigo has created a great balance between youth, which is coming from the two factory riders, and the experience and wisdom from the former 12 times World Champion.