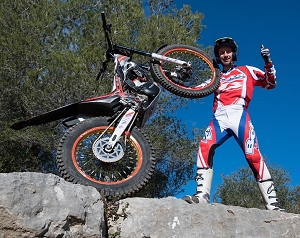 Beta Motorcycles are pleased to announce that Albert Cabestany will be part of its Factory Team for the 2018 season in what will be a welcome return after the Spaniard conquered the World Trial Indoor Championship (X-Trial) with Beta in 2002. In addition to the 2002 World Title, Albert Cabestany has been runner up 7 times and also third 6 times.

The Tuscan company has now completed the line-up of the Beta Factory Trial Team, which in 2018 has two top riders, James Dabill and Albert Cabestany, with the aim of returning among those competing to win. For Cabestany, the programme for the next season will involve the Trial World Championship and in the Spanish Trial Championship.

"I'm really happy to come back to Beta" said Cabestany. "The chance to ride this bike arrived in the right moment, because it is exactly what I need to motivate me so I can give my absolute best. I feel again the joy of riding a trials bike, and it suits my style perfectly. I want to thank Lapo Bianchi, Donato Miglio, Beta Trueba and Joan Pons for all the effort they put into this project and most of all, the motivation and commitment they showed to me from the first second we met. I will try to help the team with my experience and try to put the bike in the top places of the podium as it deserves. It will also be a good experience to have a strong teammate like Dabill because in the past all the weight of the team has been on my shoulders, and for sure I can learn lots of things from him. I would also like to thank the support of my fans at the end of the year, because this has encouraged me even more to fight for the top position’s in the World and Spanish championships".