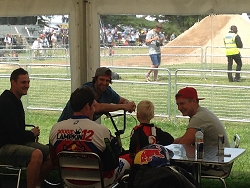 OSET Bikes has come a long way in the 10 years since it was launched.  From a small concept bike developed in Ian Smith’s garage, the electric motorbike manufacturer is now enjoying rubbing shoulders with exclusive company that includes F1 stars and royalty as well as designer brands Cartier, Veuve Cliquot and Bentley.

Motorsports legends including Emerson Fittipaldi and his grandson made full use of the OSET have a gos and visited every day to ride the bikes round the specially designed grass route.

Over the course of the weekend OSET provided over 500 test rides as well as daily demonstrations from national riders Stefan Mewett Richardson, Sophie Bailey and Harry Turner.  As well as OSET ace  13 year old Oliver Smith and his 5 year old brother, Eliot.

Ian Smith, founder and CEO of OSET Bikes, said; “It was a real privilege to be part of such a high profile and prestigious event.  Goodwood is renowned in the world of motorsport and is unique in its ability to bring together so many disciplines.  We thoroughly enjoyed ourselves – as did all the kids that got to ride an OSET and we’re very much looking forward to being part of the event again next year.”

OSET made up part of the GAS arena that featured off road stars Dougie Lampkin and Alex Wigg alongside X Games gold medallist and Freestyle Motocross founding father, Spain’s Edgar Torronteras and many others from the world of off-road sport.