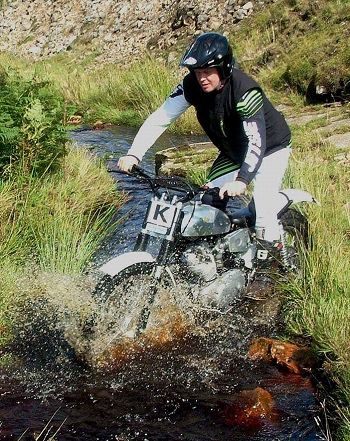 The annual Yorkshire Classic MCC two day trial weekend was once again held at the old lead mines at Greenhow. The double header Championship event has a full 40 points up for grabs in each class. Tim Pawson and Andy Scott set the sections and as usual ten sections were ridden four times on Saturday with three laps of fifteen sections on day two. The venue is known for the quality of its stream sections and the overnight rain raised the water levels in Gill Beck for Saturday’s sunny adventure with Sunday being cooler with the odd light shower.

Ripon’s Paul Dennis has joined the fray on his Cub and was one of three riders who set the pace for the weekend by going clean on day one. John Maxfield on his Bantam also went clean together with a resurgent Mick Whitlow (Cub) on the Clubman’s route to add to his previous week’s penalty free Northern British success at Llangollen.

Tony Calvert also Cub mounted was close behind losing a single dab on the tough section 8 at the head of the beck. The top 10 clubmen course riders were all on 3 marks or less despite the greasy nature of the rocks.

Due to the high water levels, only the shallower sections of Gill Beck were used.

The criss crossing of the beck at section one rode better than it looked. The second was easy for the clubmen riding the margins where the premier route went up the centre. The recent rains had washed much of the slime from the rocks and so it wasn’t until section 6 for the clubmen and 7 on the harder route that significant numbers of marks were lost. Senior rider Neil Walker belying his age finished 2nd in the clubman class lost 2 of his total of 3 at section 6.

Jo Bradley (B40) lost 1 and Ian Myers (Cub) lost 2 at section 7 to add to their single figure totals.

The experts only Section 8 was the hardest of the day with its rocky approach between boulders to left turn weave towards the finish. Only the two top experts stayed clean here with Calvert losing his sole dab on the rocks.

Section 10 was tricky early on with stray boulders catching the unwary.

As usual, five extra sections were added for Sunday making it a day for 3 laps of 15 sections including a trip up onto the moors. The sections were stiffened a little and no-one went clear on the second day.

The first three sections were a revamp of the previous day’s offerings and caused little trouble except for Ian Broomhead’s total score of 3 on his Bantam.

The 4th had an added dimension of a kink round a big rock and a finish across larger embedded boulders for the 50/50 and premier route riders that caught Calvert out costing him a missed flag 5. Top Clubman Mick Whitlow spoiled his clean ride here with a soft dab.

Section 6 was yesterday’s expert only section and again it took top marks. Only Calvert, Dennis, Bradley and Nick Jefferies (Bantam) stayed clean on all 3 laps.

Section 9 led riders up to the large grey rocks high on the hill at sections 10 and 11. The latter usually takes lots of marks but rode well on this occasion.

The path then led to the lowest section on the beck where marks were lost in number. The slippery whiskey coloured waters of section 12 led to a nasty 18 inch sharp faced rock that needed a bit of speed, determination and luck to get over clear on the 50/50 and hard routes. Only George Emmott (Tri Twin) , Darren Walker (Drayton C15) and 50/50 rider Adam McCanna on dad’s Pre Unit Royal Enfield Bullet remained feet-up over the 3 laps. Several unfortunate early baths were recorded here.

The two final sections also saw drama with Steve Rayner (Cub) also taking a big dip, Joe Bradley lost 9 of his 10 on the slippery slabs and Paul Dennis dropped a 5 on his 2nd lap to lose control of the winner’s laurels.

So the overall best performance over the two days went to two riders. Tony Calvert again headed the field but this time he had to share it with Paul Dennis, both losing 7 marks over the two days with the older rider tiebreak going to Calvert. John Maxfield was close behind losing 8 followed by Andy Scott on 13, Jo Bradley on 14 and Ian Myers on 17.

Mick Whitlow stormed the Clubman route from Barry Fieldhouse and (Bantam) on 1 and Geoff Walker also Bantam mounted on 22.

It had been a first class event at a top class venue and the club put on a good show as usual.