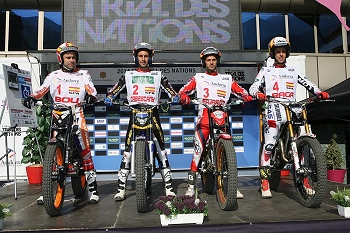 Few would bet against the Spanish dream team of Bou, Cabestany, Fajardo and Raga this weekendThe 2015 Trial season will come to a close this weekend when the FIM Trial des Nations takes place in L'Hospitalet de l’Infant, Spain. This will mark the third time that this prestigious team competition has been hosted on Spanish soil, the other two occasions being in 2000 when the event took place in Seva and then in 2004 when the action played out in Cordoba. As was the case eleven years ago there will be three trophies up for grabs this weekend – World Championship Group – International Trophy Group and the FIM Women’s Trial des Nations.

Back in 2000 the Spanish men’s team was victorious in front of their home fans as Albert Cabestany, Marc Colomer, Marc Freixa and Marcel Justribo convincingly beat their Japanese rivals. Spain’s winning margin on that day was nineteen marks with Takahisa Fujinami, Kenichi Kuroyama, Tomoyuki Ogawa and Taichi Tanaka unable to stop Cabestany and co, but still doing enough to narrowly demote the British line up of Dougie Lampkin, Steve Colley, Sam Connor and Ben Hemingway to the third step of the podium.

In the International Trophy Group it was the United States who were triumphant in Seva as their squad comprising of Geoff Aaron, Jess Kempkes, Raymond Peters and Cory Pincock beat the Netherlands by a mere three marks after a closely fought day of inter countries competition. Making their long journey to Europe worthwhile Australia rounded out the rostrum in this class. Making it a double celebration for the home fans Spain’s Women won their category with Laia Sanz and Dolores Sanchez taking the win by a single mark from France as Great Britain completed the female top three, fifteen years ago.

In a repeat of four years earlier Spain’s men again won the main trophy as the event this time was held in Cordoba. The changed team comprised two members from 2000 those being Cabestany and Freixa who were joined by two new faces in the form of Adam Raga and Jeroni Fajardo. The revision in personnel only served to strengthen Spain’s superiority as they recorded a fifty mark-winning margin over the slightly changed British squad of Lampkin, Colley, and Connor who were on that occasion supported by Graham Jarvis. It was Japan who had to settle for the bronze medal this time around as they ended the day ten marks behind Team GB.

Ireland secured the first of their two wins in the International Trophy Group in Cordoba, the second coming two years later in France. The celebrations that followed the success of Robert Crawford, Andrew Perry, Michael Burton and Gareth Andrews are now apart of the history of the FIM Trial des Nations and typify the incredible spirit that continues to exist with this great event. The Norwegian team of Erik Lars Fremstad, Mardon Moi, Thomas Schie and Steffen Solheim were worthy runners-up in this class back in 2004, whilst Belgium were the final podium finishers in the International Trophy Group in Cordoba.

After a long absence from one of the strongest Trial countries in the modern era of the slow speed discipline, the FIM Trial des Nations makes a welcome return to Spain this weekend, when those riders representing the host nation are to appreciate the importance of delivering their absolute best performance in front of their expectant home fans.