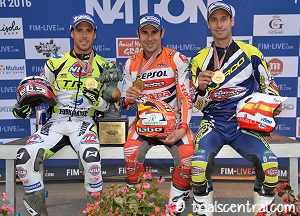 Very much as expected, hot favourites Spain – represented by Toni Bou – Repsol Honda, Adam Raga – TRS and Albert Cabestany – Sherco were victorious at the 2016 FIM Trial des Nations held at Isola 2000, France. The mighty Spanish squad claimed their thirteen straight win and twenty third in total in impressive fashion as they remained faultless throughout the two laps of eighteen sections. Whilst their victory was perhaps never in doubt, Spain were made to work hard for their win as both runners-up Japan and third placed Great Britain both recorded single digit final scores.

The experienced trio of Takahisa Fujinami – Repsol Honda, Kenichi Kuroyama - Yamaha and Tomoyuki Ogawa – Honda did Japan proud as they posted lap totals of five and two respectively to secure second spot by a single mark in what proved to be a low scoring Trial for the leading three nations, which played out in dry and sunny conditions despite the predicted heavy rain. Great Britain’s squad comprising of James Dabill – Vertigo, Jack Price - Gas Gas and Iwan Roberts – Beta put in a strong performance and were worthy of their third position having been pushed off the podium by France last year.

The host nation, represented by Benoit Bincaz – Scorpa, Alexandre Ferrer – Sherco and Loris Gubian – Beta could also be pleased with their showing, despite failing to make it back on to the podium in front of their home fans, after they finished the day seven marks in front of Italy. The Italian line up of Matteo Grattarola - Gas Gas, Luca Petrella – TRS and Gianluca Tournour - Gas Gas rounded out the top five in the World Championship class leaving Norway’s Ib Andersen – Beta, Hakon Pedersen - Gas Gas and Kristian Sorensen – Sherco in sixth place.

In the International Trophy class it was the usual tussle between Germany and the Czech Republic for the top spot, but this time with Sweden also thrown into the mix. Eventually it was the German team of Jan Junklewitz – Sherco, Franz Kadlec - Gas Gas and Jarmo Robrahn - Beta who snatched the win in an extremely closely fought competition.

Germany dropped just one mark on each lap to finish the Trial on two marks. The fight for the runner’s-up spot and third place could not have been tighter with the Swedish line up of Daniel Andreasson – Scorpa, Marcus Eliasson – Beta and Eddie Karlsson - Montesa finally claiming second position by virtue of a most cleans tie-break after they ended the day on six marks along with the Czech Republic. Last year’s winners, the Czech Republic represented by Martin Kroustek - Vertigo, Martin Matejicek – Gas Gas and Marek Wunsch – Gas Gas had to be satisfied with third spot on this occasion, whilst the USA and Australia respectively completed the top five in the International Trophy class.

Today’s competition brought a close to the 2016 outdoor Trial season.

Trials Central Supporters - Jumbo gallery of 250+ images from today's competition, hi-res and unwatermarked, can be accessed by clicking here