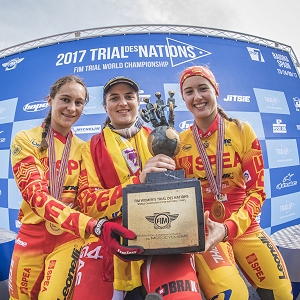 Great Britain's hopes of a fifth straight FIM Women Trial des Nations title were left in tatters at Baiona after an almost faultless display of sparkling Spanish brilliance was rewarded with a famous victory on home soil.

Roared on by their passionate and partisan fans, the Spanish trio of Sandra Gomez - Gas Gas, Berta Abellan - Beta and Maria Giro - Montesa parted with just one miserly mark conceded on the penultimate section of the Trial.

The defending champions led by reigning TrialGP Women Champion Emma Bristow - Sherco with Donna Fox - Sherco and Jess Brown - Scorpa started the day on the back foot after a disaster in Friday's timed qualification section when, despite posting the fastest time by almost three seconds, a stray mark dropped them back to sixth.

This meant they had to start in the first half of the ten-nation field while Spain, who comfortably topped qualification from Germany and Italy, had the advantage of being last away.

With warm, sunny conditions the fifteen sections plotted over a two-kilometre course on rocks around a headland on the Atlantic coast remained dry and grippy which meant that the slightest slip would be punished.

As nation's best two scores in each section counted towards their total and Great Britain were playing catch up from as early as section six on the opening lap where they lost three marks. Despite matching the Spanish score-for-score on lap two the damage was already done and Great Britain were forced to concede defeat.

"I'm so happy," says Gomez. "It has been four years since we won so it's fantastic to win again and to do it in Spain. The fans have been awesome and the venue is incredible. We worked together as a team so if one rider made a mistake the others went clean which was fantastic."

"We decided this morning to be fast around the course because we thought maybe time could be important. We didn't know the scores of the other teams, we just concentrated on our own performances and enjoyed ourselves - the party tonight will be amazing!"

Tied on three marks with Great Britain after the opening lap, the German team of Theresa Bauml - Beta, Ina Wilde - Gas Gas and Jule Steinert - TRRS saw their chances of a fifth consecutive podium finish disappear on lap two after they added a further eight marks to their total.

Instead, Ingveig Hakonsen - Beta, Huldeborg Barkved - Sherco and Mette Fidje - Sherco claimed a surprise first Women TDN podium for Norway since 2002 with a second lap score of just two dragging them back into contention on a total of six.

Italy finished fifth on twenty-three marks lost before a forty-five-mark gap back to the USA who rounded out the top six.

The scene is now set for tomorrow when, competing over a much harder version of today's course, Spain's men's team will start favourite to win the FIM Trial des Nations title for an amazing fourteenth consecutive time.