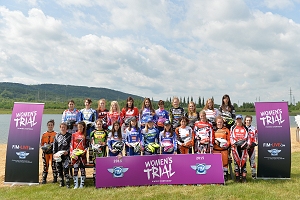 Whilst summer represents the end of the academic year in the more usual schools settings around the World over, the long warm days and additional freedom provided by this traditional mid-year break offers the perfect opportunity for a different kind of education.

The now annual two-day event hosted in Kramer’s native land of Germany attracted no less than thirty-five female participants from Denmark, the Netherlands and the home nation. The lure and importance of this occasion was confirmed by one of the Danish girls having made an eleven-hour road trip in order to be part of the camp.

Whilst all of the girls were looking to improve and strengthen their own skills, the ladies from Denmark had a particular goal associated with their attendance as they included the camp as part of their preparations for the forthcoming FIM Women’s Trial des Nations that will take place in Tarragona, Spain in mid September.

The same Spanish venue will also host the climax to the 2015 FIM Women’s Trial World Championship on the Friday immediately prior to the team competition, this will follow on from the second round of the series for the female contenders that will now take place in Teo, Spain the previous weekend.

Back in Germany, where the temperature reached thirty degrees Celsius, the nearly forty strong gathering of girls were divided into six groups according to their ability, each group then received five hours of focused tuition during Saturday’s session from their respective instructor before then being able to share their experiences at the evening barbeque. The relaxed and social atmosphere, with the addition of well-chosen music allowed the girls the chance to form new friendships and swap their Trial stories.

Sunday brought more on bike learning as the groups were this time each deployed with a fresh member from the coaching team to continue on from Saturday’s programme, and no rock was left unturned as the girls spent another six hours in the saddle before signing off on what was universally deemed a great weekend.

Despite the testing and demanding nature of the FIM Women’s Trial Training Camp there were no accidents or injuries. Instead come the finish there was just a group of tired but smiling girls who had thoroughly enjoyed and learned much from the weekend, all of whom were happy to join together for the final group photo.

Reinforcing this feeling participant Ina Wilde said: “This camp is the perfect opportunity for the girls from Germany and northern Europe to practice together and share a great time. We have been practicing riding non-stop, which is great as in the German championship this is not possible. On Saturday evening we had a brilliant BBQ, which was also a great opportunity to get to know each other better. All in all it was an amazing two days!”

Iris Kramer summed up the event by saying: “It is always a pleasure to see so many girls coming and practicing together. The atmosphere with the girls is always special and we all had a great time together in Grossheubach. The venue is just perfect for this kind of training camp. And the get together in the evening after practice was also a fantastic opportunity to meet the girls, which were not in your particular training group. This time we had for the first time girls from three different countries practicing together, which is another point of progress within the Women’s sport of Trial.”

The second round of the 2015 FIM Women’s Trial World Championship wiil take place in Teo, Spain on 12 -13th September.