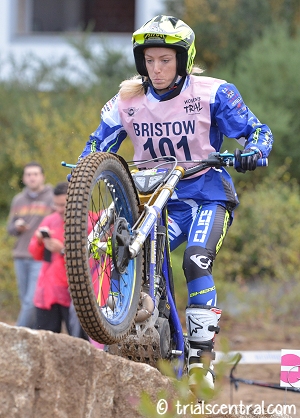 Emma Bristow – Sherco moved a step closer to clinching 2015 FIM Women’s Trial World Champion when she recorded a resounding victory on the opening day of the second round in Teo, Spain. The defending champion was in a class of her own and ended the three laps of ten sections with a total of twenty-three marks, exactly half that of her nearest challenger, Rebekah Cook – Jgas. Cook had to ride herself back into the runner’s-up spot when she found herself trailing eventual third placed rider Ina Wilde – Gas Gas after the second lap. Just a single mark separated Cook and Wilde come the close of play with the young German rider missing out on equalling her best performance, second place on the second day of the opening round in the Czech Republic back in late May.

Warm but overcast weather was the order of the day as the twenty-six female competitors battled it out on a course that took them high into the hills above the starting area in Teo. Sadly, title challenger and home rider Sandra Gomez – Scorpa was not amongst the starters today after a freak training accident late yesterday afternoon left her with two broken bones in her right foot, an injury that will now probably spell an end to her season with the final round of the series being in less than seven days time. The remaining girls found conditions out in the hazards difficult in general with heavy overnight rain forcing late changes and making the terrain slippery.

The added severity and greasy going proved very much to Bristow’s liking as she carved out an early lead despite taking a five in the third section along with the rest of the field. Emma then only parted with further marks in the fourth and seventh hazards to end the first lap on nine marks. This was already eight in front of her nearest challengers, which were Cook and Donna Fox – Sherco at this point. Wilde and Mireia Conde – Beta completed the top five at this stage of the competition another two marks back.

Bristow was to stretch her advantage over the next ten sections as she produced her best lap of the Trial, losing a mere five marks on her second tour. With a subtotal of fourteen marks, Emma was now seventeen clear of her nearest rival, Wilde who also delivered her best score on lap two. Cook, Fox and Germany’s Theresa Bauml – Ossa were the next in the running order with little splitting places two to five at this point in the Trial.

Reigning champion Bristow who, if victorious tomorrow, will be crowned champion for the second year in a row, signed off her day with another solid lap to put herself well out of reach of even her nearest rivals. Despite incurring two time penalties on the last lap, Cook did just enough to steal the runners up spot away from Wilde by a single mark. With Wilde taking the last spot on the podium, Fox and Bauml rounded out the top five on day one.

Spain’s best finisher on the day was Berta Abellan – Sherco who took sixth position on fifty eight marks, six marks t better than her compatriot Conde. Two more Spanish riders filled the next two berths with Elisabet Solera – Ossa and Maria Giro – Beta ending the day in eighth and ninth respectively. Britain’s Jess Bown – Scorpa was the last rider inside the top ten on the opening day in Teo.

The 2015 FIM Women’s Trial World Championship will continue tomorrow with the female competitors again facing three laps of ten sections that will be slightly modified overnight to allow for any changes in the weather and taking today’s scores into consideration.

As this was a joint event with the Men's World Championship Trial, our photo coverage from today can be found within the Men's news article here