2016 is a special year for females who ride bikes with it being ten years since the FIM Women in Motorcycling Commission was first formed. Women’s Trial has always been an important part of this project and was the first of the FIM Women’s World Championship to be realised and will therefore feature strongly in the celebration plans that will mark this significant anniversary.

This year will see the 2016 FIM Women’s Trial World Championship being contested over three separate events with the series opening in Great Britain on 16th/17th July before then resuming for the second encounter in Italy on 3rd/4th September. The last round will take place in France on 9th September on the same weekend as the FIM Trial des Nations / FIM Women’s Trial des Nations. The final event in the French mountains will include some extra activities, details of which will be confirmed in due course, which will mark the ten-year anniversary of the Women’s Trial community. 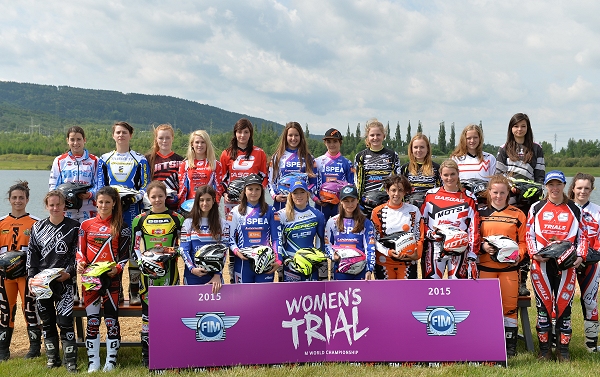 The continued growth of young female riders joining the sport of Trial and becoming a part of the FIM Women’s Trial World Championship over recent seasons has been a real success story and has been much due to the work done by the FIM’s female representative Iris Kramer both at the events and her commitment to the now annual Women’s Trial training camp that takes place each summer.

Kramer, herself a former FIM Women’s Trial World Champion, plays an important part in the series today as the Women’s Section Advisor to ensure that the course is suitable for all levels of female riders who contest the different rounds and has been instrumental in making sure the girls get the right coaching to support their progress via the now established Women’s Trial training camps.

This year the FIM Women’s Trial Training Camp will take place at Kerzenheim, Germany on 30th/31st July with Iris again leading a team of highly qualified instructors who will put the girls in attendance from all over the World through their paces. With two packed days of training planned every female rider who is present is sure to benefit from this great occasion.

Australia’s Kristie McKinnon is a previous attendee and confirmed just how important the training opportunity is to her and the other girls by saying. “The FIM Women’s Trial Training Camps are my favourite part of competing in the World championship. It is a great opportunity to meet and ride with girls from different countries, without the pressure of competition. It is so much fun to train with other girls that have the same passion for Trial. The coaches are World class and totally understand Women’s Trial.”

Nita Korhonen - Director Women in Motorcycling Commission explained. “For the past decade the commission has worked hard and dedicated all its energy to increase the number of Women involved in motorcycling and to promote their presence in all motorcycling related activities, sporting and non-sporting. Many projects and initiatives have been implemented to reach these goals, including the FIM Women’s Trial Training Camps which continue to be a huge success each year.”