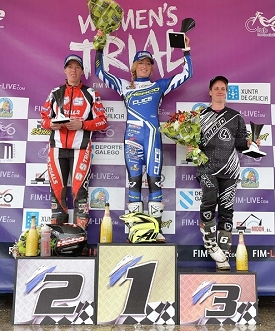 The 2016 FIM Women’s Trial World Championship gets underway this weekend when Parkwood Off Road Centre at Tong, near Bradford in Yorkshire stages the first ever female round in Great Britain. This initial two-day event will be followed by another two-day round in Italy at San Pietro Mussolino and finally a single day of competition in France the day before the FIM Trial des Nations at Isola 2000 all during the early part of September.

Britain’s reigning and two-times FIM Women’s Trial World Champion Emma Bristow – Sherco is favourite to make it a hat trick of titles in 2016. Emma, three times runner-up in the series and now in her eleventh championship season, is totally focused and says her pre-trial preparation has gone absolutely to plan.

Becky has been vice champion no fewer than five times while Donna is expecting 2016 to be her last Championship season. Donna first rode the Women’s series in 2002 and third place in 2015 has been her best finish.

Other than her compatriots, Emma’s main rival this year is expected to be Sandra Gomez – Gas Gas. The Madrid born girl being a recent signing of the resurgent Gas Gas factory. Sandra was third in the series in 2012 and 2014, but dropped to eighth last year after injury forced her out after the opening round in the Czech Republic.

The Women’s series was first staged in 2000 and was won by the incredible Laia Sanz. Laia then won the title every year until 2014 with the exception of 2007 when Germany’s Iris Kramer claimed her lone crown. Laia, now a top rally and enduro competitor, won a total of thirteen FIM Women’s Trial World titles.

2016 will see that contenders drop their one worst result instead of the two drop-score rule implemented previously, which will hopefully reward consistency over the five counting days which kicks off this weekend at Tong.