Back to Back Wins For Emma Bristow 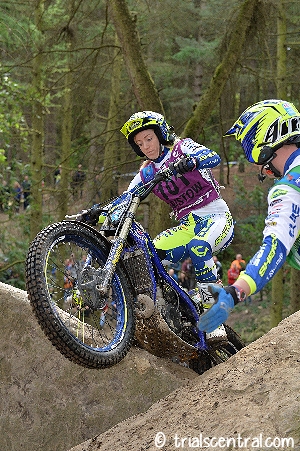 Emma Bristow – Sherco made it back-to-back wins over the opening weekend of the 2016 FIM Women’s Trial World Championship after she again took the victory on the second and closing day of her home Grand Prix held at Tong, Great Britain. As had been the case just twenty-four hours earlier Bristow again took control of the event from the first of the two laps of twelve sections as she completed her first tour for the loss of only six marks, despite parting with an early three in section three. Emma maintained her form throughout the second lap and only added a further three marks to her tally to end the day on nine, six marks better than her nearest challenger.

Despite taking maximum championship points Bristow was not happy with her riding on day two. “I have not ridden well today. The second lap was better but it needed to be. For some reason I was quite relaxed yesterday, but today I felt both nervous and tense and it showed in my riding. The changes to the sections were good and certainly made the Trial more challenging. Two wins is a great start to the championship, now I need to keep training and keep a good level for the next round in Italy.”

For the second day running, but with five modified sections, it was Rebekah Cook – TRS who finished the Trial as runner up, this time with a total of fifteen marks. Cook actually stole the early lead over Bristow, but fives in section six and nine spoiled what was an otherwise strong showing. Fourth at the end of lap one, Rebekah rode her way back up the leader board during the closing twelve sections to claim a well-deserved second spot come the close of play.

With two established names occupying the top two places, perhaps the story of the day was Spain’s sixteen-year-old Berta Abellan – Beta who claimed her first ever podium to supersede her career best fourth place from yesterday. Over the opening weekend of the new series, Abellan has already announced herself a top three challenger and now holds third spot in the general standings behind Bristow and Cook respectively.

Berta’s far more experienced compatriot Sandra Gomez – Gas Gas had to settle for fourth spot today as she finished four marks behind her new and younger pretender. Gomez sits on twenty-eight points in the title race with Abellan, but is currently demoted to fourth in the series standings after having recorded the lower of the day two results in this Spanish pairing.

As with the men’s series, the 2016 FIM Women’s Trial World Championship will now pause for the summer break before resuming for the second round in Italy in early September.

As this was a combined event with the Men's Championship, access to our photo coverage can be accessed in the men's news article by clicking here