Toni Bou (Montesa Cota 4RT) started to defend his X-Trial World Champion title, which he has held for the last seven consecutive years, by winning the Sheffield Indoor Trial, first event in this edition of the championship. The Montesa rider obtained his victory number 37 (an absolute record) in indoor world championship indoor events, the last 22 being consecutive.

The main novelty in X-Trial regulations this season consists in the four finalists starting from scratch in the final, without adding their respective scores from the semi-final. Toni Bou closed both the qualifying lap and the semi-final with zero points and achieved victory on passing the first zone of the final with one point and the second with two, after which he had already acquired the difference that finally put him in front of the second classified. 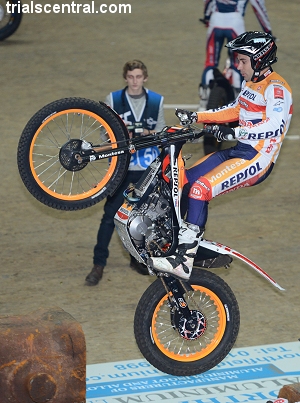 Takahisa Fujinami (Montesa Cota 4RT) felt the effects of his right knee ligament, broken three months ago, costing him a podium position in the last zone. The Japanese rider was sixth in the qualifying lap (15 points) and second in a close semi-final (5 points).

Toni Bou: “It's been very important to begin the season with this victory and continue fighting as hard as possible. It's going to be a tough championship as with only four zones in each final and beginning with zero points it'll be difficult to make a difference. We've seen this clearly here in Sheffield; it's been an easy race, but it was also easy to make small mistakes that are difficult to recover from with strong rivals like Albert [Cabestany] ”.

Takahisa Fujinami: “When I broke my knee ligaments I ruled out a surgical operation as the recovery would have stopped me from participating in the XTrial world championship and would have also compromised the outdoor. So I chose to work on the muscles. I only trained for a week and came here with my knee 75% recovered. Each zone passed was a relief, but in the last one my knee was finished and that's where I lost the podium position”.

The second of the six events in the FIM X-Trial World Championship will be held in Marseille, France, on January 25th.