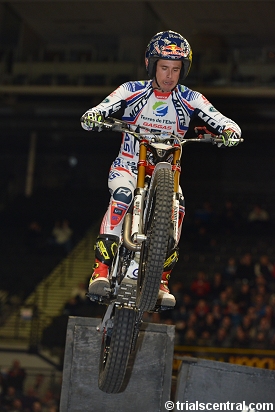 It was a good start to the season for Adam Raga at the Motorpoint Arena in Sheffield, the scene of the first round of the 2015 X-Trial World Championship and in which the Gas Gas rider showed that he has maintained the same high level of riding seen over the previous season.

Adam Raga finished third after ranking second in the race for most of the evening. A mistake at the entrance of the fourth of the six sections of the final round cost the Ulldecona rider second position on the podium. The positions of honor, as reflected in the total points shown upon the cards of the top riders, were expensive in Sheffield, where Raga managed to keep third place and thus close this, the first race of the year with a laborious effort to achieve the third position upon the podium. Michael Brown, Gas Gas rider from Great Britain, finished in seventh place in the home Grand Prix for the nationally second-ranked British rider.

After this first round of the X-Trial World Championship calendar, the Gas Gas rider will be ranked in third place in the interim. Marseille (France) will host the next round on January 31st.

Adam Raga: “This first race went pretty well even though third place might not be a true reflection of how the race went in Sheffield. I've ridden good, both in qualifying and in the end, but I made a small mistake at the start of the fourth section and have scored a five, finally costing me second place. Anyway, considering that last year here I was fifth and seventh the year before, I think the result is very positive for us. The championship has just begun and we have to keep working."