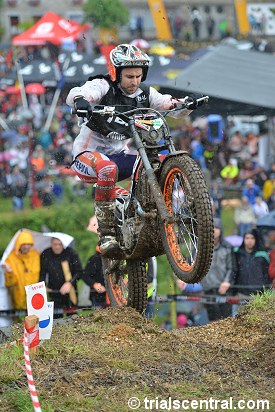 With yet another victory, Toni Bou took his World Trial Championship victory tally to 60 today in Belgium’s Comblain-au-Pont. However, it was anything but an easy win for the Repsol Honda Team rider, whose near flawless second lap made amends for the previous one, in which the Spaniard had committed more than his usual quota of errors. The victory is the rider’s third this season.

On a day made complicated by continual downpours, leaving some sections with a heavy build-up of mud, not to mention slippery hillside and rocks, Toni Bou on the Montesa Cota 4RT was able to negotiate the delicate terrain of the Comblain-au-Pont track with great skill. The results brings Bou an additional 20 points in the world championship and stretches the deficit over nearest rival, Adam Raga, to four points.

The difficult condition of the terrain proved to be something of a salutory lesson for Takahisa Fujinami, who in spite of two tricky first laps, was able to pull back in the third to finish fourth overall in the event. Repsol Honda Team’s Japanese rider now lies in fourth place in the overall standings.

The next stop for the Repsol Honda Team will be the two-day British GP next Saturday and Sunday, July 19-20, the championship’s sixth outing, set to take place in Penrith near Carlisle in north-west England.