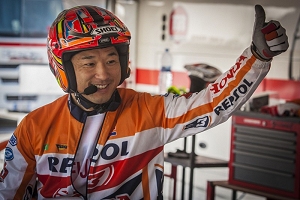 Toni Bou, Takahisa Fujinami and Jaime Busto of Repsol Honda Team are this weekend set to tackle the fourth date of the FIM Trial World Championship in Great Britain, one of the most emblematic events of the championship.

After trips to Japan, the Czech Republic and Sweden, the next destination is the U.K. with one of the most important GPs of the season. Great Britain is, of course, a country heavily steeped in the trial tradition, with a long history of the discipline, having produced some of the great historical figures and where spectators appreciate the intricacies of the sport’s techniques.

Nord Vue plays host to the fourth round of the trial championship that sees Toni Bou arrive on top of his game and on top of the leader-board after six back-to-back victories. The Montesa Cota 4RT rider sits on a 28 point advantage over closest second-place rival Adam Raga and arrives at a circuit which has always been a lucky charm for the Catalan ace whose participations correspond to the number of wins.

Repsol Honda Team colleague Takahisa Fujinami also goes in search of a good result after refinding his form in the Swedish GP, where he finished on the podium in the first of the two races. The Japanese ex-world champion currently holds fourth place in the overall standings with distinct possibilities of improving on this position.

Likewise, rookie Basque rider Jaime Busto will endeavour to continue his apprenticeship amongst the World Pro elite at his first season with Repsol Honda Team. Busto is sixth overall.

The Nord Vue trial, close to Carlisle and Penrith will consist of a 2.5 kilometre route that has been designed featuring twelve sections. As is usual, riders will have to complete three laps with the final rider – Toni Bou – due to set off at 11:00 a.m. local time (GMT).