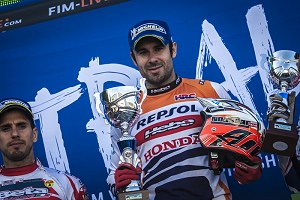 Repsol Honda Team rider Toni Bou sent a clear message to pretenders, showing who the numero uno in trial really is. Bou dominated the first day in Portugal with one of the best performances this season – not an easy task given the simplicity of the trial – where mistakes prove costly and nerves have to be contained. Toni picked up a sole penalty mark in section two of the first lap and went on to complete a near-flawless trial, collecting only two points for excess time.

Today’s victory leaves Bou just a short step away from collecting his ninth title. The Montesa Cota 4RT star will mathematically guarantee the crown tomorrow, if he repeat’s today’s achievement.

Jaime Busto proved to be the biggest surprise of the day, repeating a fourth place finish as he had done once earlier this season in the Czech Republic. Repsol Honda Team’s Basque rookie was in rostrum territory throughout the first two laps and looking poised for the year’s personal best until an excess of errors on the final loop put paid to the rider’s ambitions.

Takahisa Fujinami was hit by an attack of lumbago shortly after the start of the trial which made life difficult. The Japanese ex-champ battled on in spite of the pain but saw his efforts hampered as penalty marks began to accumulate on the score-sheet. Fujigas made it through to the end in eighth spot.