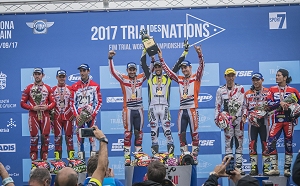 The FIM Trial des Nations, which takes place this coming weekend at Sokolov in the Czech Republic, is widely regarded as the Olympics of Trial with teams from an incredible twenty-three different countries coming together to decide global bragging rights across three classes. It is hardly surprising given their dominance of the modern-day sport that Spain reign supreme in the premier Men's World Trophy category. In fact, in the event's thirty-four-year history the Trial powerhouses have won on no fewer than twenty-four occasions and are looking to stretch their current win-streak in the competition to a fantastic fifteen.

It was not always the case however and when the Trial des Nations launched in 1984 in Poland it was the four-man French squad of Philippe Berlatier, Gilles Burgat, current FIM Trial Director Thierry Michaud and his older brother Fred who came out on top. Winners again in 1985 and 1986 in Italy and Austria with a largely unchanged team - only Fred Michaud had been replaced by Pascal Couturier - the hat-trick cemented France's reputation as the leading Trial nation on the planet.

Italy claimed their sole TDN victory in Finland in 1987 with Diego Bosis, Renato Chiaberto, Carlo Franco and Donato Miglio before France bounced back the following year with Thierry Girard joining Berlatier, Couturier and Michaud on top of the podium.

Incredibly, Spain had to wait until 1989 to take their first TDN title with Jordi Tarres - who had just secured his second FIM Trial World Championship - leading Amos Bilbao, Andreu Codina and Gabino Renales to a landmark victory in Belgium.  The French struck back on home soil for their fifth and final TDN win in 1990 with Berlatier, Couturier, Girard and Bruno Camozzi, but after that it was Spain all the way with the red and yellow Rojigualda flying high above the podium for the next six years.  With Tarres, Bilbao and Marc Colomer forming the nucleus of their triumphant team - supplemented by Renales, Joan Pons, Angel Garcia and Marcel Justribo - the Spanish looked invincible, but then - on an emotionally-charged day on the Isle of Man in 1997 - Great Britain's Dougie Lampkin, Graham Jarvis, Steve Colley and Dan Clark ended Spain's run of victories.

Spain came back in Italy in 1998 with Jordi Pascuet replacing the recently retired Tarres before Britain returned to the top in 1999 with Martin Crosswaite taking Clark's place on the victorious team as the two great Trial nations went toe to toe. The new millennium was marked by Spain's ninth TDN victory as Albert Cabestany got the call-up for the first time alongside Colomer, Justribo and Marc Freixa and in 2001 - with Justribo dropped in favour of team newcomer Adam Raga - they retained their title.

Britain fought back in 2002 with Lampkin, Colley, Jarvis and Sam Connor taking a one-mark win from Spain in Portugal and the following year, with Ben Hemingway replacing Colley, Britain claimed another one-mark victory over their fiercest of rivals.

Since then the Spanish Armada has dominated the TDN with Toni Bou, Raga and Cabestany forming the backbone of a dream team every year since 2005 with teenaged talent Jaime Busto getting the call up instead of veteran Cabestany last year.

First held in 2000, the FIM Women's Trial des Nations was initially wide open with Spain, Germany, Norway and France all victorious during the first six years of the competition before Maria Conway, Rebekah Cook Talbot and Donna Fox steered Great Britain to the top in 2006 and 2007.

Spain won the Women's World Trophy again in 2008 with off-road legend Laia Sanz, Sandra Gomez and Mireia Conde, but Emma Bristow, Joanne Coles and Cook Talbot put Britain back on top in 2009. From 2010 to 2012 the Spanish trio of Sanz, Gomez and Conde reeled off a hat-trick of wins and from 2013 until 2016 the FIM Women's Trial des Nations was locked down by the British - first with Bristow, Coles and Cook Talbot and since 2015 with Bristow, Cook Talbot and Fox - before Gomez, Berta Abellan and Maria Giro wrestled the title back on home soil last year.

The second-tier Men's International Trophy is always fiercely-fought and incredibly competitive and this year the Australian team will be going all-out to defend their title with strong opposition expected to come from, among others, the United States and Czech Republic teams.

The full entry list of those representing their countries at this year's TdN can be downloaded below.