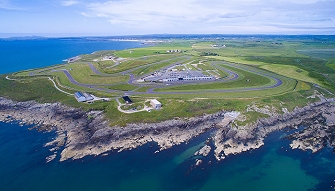 Following on from the success of TrialGP Great Britain earlier this year, Series propoter Sport7 are delighted to announce a fantastic new venue for next summer's home coming. TrialGP Great Britain 2019 will take place on 31st August / 1st September at the breath-taking Anglesey Circuit / Trac Mon - www.angleseycircuit.com - in North Wales. The well-appointed permanent motorsports venue with its amazing coastal setting will provide the opportunity to deliver a new and higher level of event with the majority of sections set to be plotted along the adjacent and stunning rocky shoreline.

Looking to exploit the circuit's full range of facilities, a packed programme of motorsport activities - both on and off the track - is being planned to make it a weekend not to be missed, and one that will include the opportunity of onsite camping to ensure fans can be close to the action throughout.

This will mark an important moment for Wales as it hosts a round of the FIM Trial World Championship for the first time since Merthyr Tydfil was last part of the series back in 1990. Set on the west coast of the Isle of Anglesey, overlooking the Irish Sea and with the Snowdonia mountain range as a backdrop, the circuit will proudly welcome both male and female riders from around the World and across five different classes. Having only been done once before in Japan earlier this year, this will be the first time any European venue has accommodated this scale of event.

Located in one of the most scenic regions of the UK, visitors to the event will also be able to enjoy and experience the many other attractions on offer in the area and take advantage of the wide range of accommodation that is available within easy driving distance of Anglesey Circuit - further details can be found at www.visitanglesey.co.uk.

Commenting on this exciting development TrialGP Championship Directo,r Jake Miller said. "There are few opportunities anywhere in the World to host a TrialGP event at such a well-appointed facility and in such a stunning location, so we are really thrilled to be bringing the series to such an amazing venue. The close proximity of the sections to the paddock, and the compact nature of the overall course means that viewing for spectators will be fantastic once again, especially against the incredible backdrop of the sea and mountains in the distant. We are confident that Ben Hemingway and Danny Cockshott will again be able to create some suitably tough tests for the World class riders in each of the five classes. At this early stage we would like to say a massive thanks not only to the circuit owners and their management team for being part of this joint-venture, but also to the local authorities and stakeholders who in the whole have been very supportive in bringing TrialGP back to Wales and recognising the huge benefits it will bring to the region. As is always the case when hosting events in such beautiful and sensitive areas, we are already in the active process of undertaking the relevant surveys to minimise the impact on the unique geology and natural habitats and also so as to avoid any areas that are deemed to be particularly delicate."

Speaking on behalf of Anglesey Circuit, Andrew Crighton said. "The team are proud and delighted to have the opportunity of hosting such a prestigious event on behalf of Great Britain and look forward to welcoming participants and spectators to Anglesey Circuit. This will be a landmark in our twenty-seven year history of motorsport activity. Trial represents a new and exciting addition to the existing portfolio of motorcycle and car racing, training, rallying and the development of potential motocross facilities. We believe that with careful planning and working with the vast experience of Sport7 we can put together an exciting package that will capture the imagination of any motorsport enthusiast and of every discipline. Our location should provide some stunning spectating opportunities both for the Trial and supporting activities."

"TrialGP Great Britain brings an almost unique opportunity for Anglesey Circuit to repay the faith put in its potential by the county council and Welsh government in their quest to promote Wales to the wider World whilst benefiting the efforts of regional tourism and the local economy. We hope that it will inspire a new generation, particularly of local youngsters, and bring together the motorsport and cultural heritages of all participating countries. We look forward to saying to you, 'Croeso i Ynys Mon!'."

Further event details will be released early in the new year, to coincide with general admission tickets going on sale.