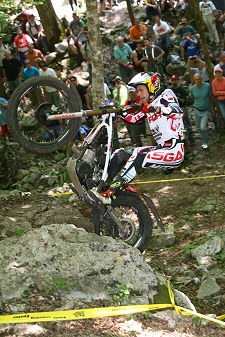 Adam Raga – Gas Gas snatched a dramatic second day victory at the US Trial Grand Prix to move to the head of the 2013 FIM Trial World Championship standings, and to complete back to back wins as the series returned to American soil for the first time in five years. Raga defeated Toni Bou – Repsol Montesa on a most cleans tie-break after the two Spanish rivals finished on twenty-four marks apiece following a tense final lap. Bou cruelly lost out by a single clean and in doing so also lost his championship lead, and now trails Raga by a single point after two rounds. Bou’s team mate Takahisa Fujinami – Repsol Montesa gratefully accepted the final podium place today having missed out on a top three finish yesterday.

Raga took control of day two from the first lap with a confident opening performance that saw him ride his way through the initial twelve sections, four of which had been modified overnight, for the loss of a mere three marks. The alterations made to the hazards were designed to make them more difficult for the second and final day of competition and appeared to have the desired effect with the riders facing a more severe challenge than twentyfour hours earlier in all three classes.

After two laps, Raga and Bou were tied in first place on eight marks apiece and with a comfortable margin over the other leading competitors. Fujinami was the best of the rest at this stage on twenty-six marks, which was four better than Jeroni Fajardo – Beta, who in turn had a seven mark advantage over Albert Cabestany – Sherco who was not enjoying the best of days in the changed conditions. These two Spanish riders would eventually finish fourth and fifth respectively. Interesting the pressure got to both Raga and Bou on the closing and decisive lap with each notching up three fives, and the pair ended up with a third lap total that was double what they had dropped over the initial two laps. Bou effectively handed Raga his second win in two days when he failed the step in section ten and caused the tie-break situation, which he would ultimately lose. 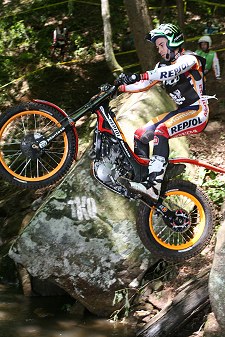 Jack Sheppard – Beta saw his lead at the head on the Junior ranking drastically reduced when he failed to repeat his first day performance and slumped to fifth on day two. Francesc Moret – Gas Gas achieved his first victory of the year as he narrowly beat compatriot Jorge Casales – Gas Gas. Just one mark separated these two competitors at the finish after the lead swapped several times during the course of the day. French rider Cedric Tempier – Sherco ended up in third spot, but a long way back for the leading duo. Casales now sits six points behind Sheppard in the championship standings, with today’s winner Moret a further four points back in third position.

It was delight for Britain’s Bradley Cox – Beta as he finally recorded his first win of the season to date in the Youth class, after having failed to find his real form so far this year. France’s Quentin Carles de Caudemberg – Beta finished as runner up today, eight marks behind Cox, but still heads the general standings with a six-point lead over his British rival. For the second day in a row Italian rider Gabriele Giarba – Beta took the last place on the podium to move up to fourth in championship table. Kenny Thomas – Beta improved on the sixth spot he occupied yesterday and earned a hard fought fourth position today. Despite arriving in the USA as the Youth category championship leader, he now has slipped to third place in the intermediate rankings before the series heads back to Europe next month following the initial two overseas rounds.

For all the news, results and photos from Day 1 in the USA, click here

For photos from the second day of action in the USA, click here