How old are we ? What is the average age of a club rider ? 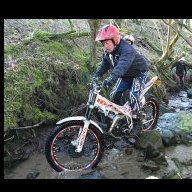 I think you need a few more categories at the upper end.

Impressive and a genuine pre 65 rider, I've mucked around for over 40 years ride more now than I ever did.