Show Us Your Ty

Too nice to ride?...   ...No Way!!! This is my wife riding the bike to a first place finish in the Novice class at AMA Vintage Days. 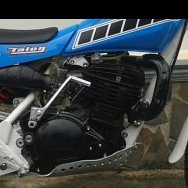