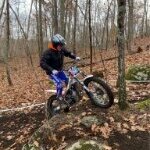 OK folks, being off work for a week (mandatory holiday shutdown) I had time to complete the fiber plate modification document. This makes the clutch progressive, eliminates drag, cold stick, slip and

Having only recently embarked on my trials experience I have been so pleased to have found the great advice and support on this forum. I thought you might be interested to see my clutch mod based on s