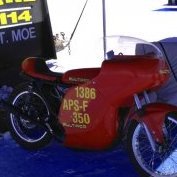 The bike unexpectedly starts in gear and runs away, throttle wide open. It careens through an outdoor antique fair before crashing into a building where it bursts into flames, burning the orphanage an

Bondy -  OK, but that's  YOUR electronic ignition, fitted to YOUR bike - not netley's.......... Personally, I'd want to check out the timing,  as suggested by oldjohn. (and check dynami

Back in the 70 / 80 's it was normal practice to run with the choke on when on the road for any distance.