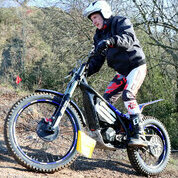 I think you're asking the impossible. All modern bikes are reliable, in the sense that they rarely break down. If you get yourself stranded, it's far more likely to be because you broke something.

You should have been around in 2011 with formula brakes on the new models. Most brake problems are self induced and almost all trials bikes use the same parts.

I was thinking he same thing !     I think this nice gentlemanshould not call gas-gas brand trash.  They have a new factory. with ktm-s help they will be around long time i hope.  TimDH should just go