Why are Spanish riders so good? And other chit chat 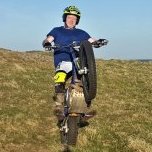 Oh I'm enjoying this, cock waving at the highest TC level    btw, and believe it or not, I'm actually national champion at my level I'm embarrassed to say

Better weather, plus they evolved the sport rather than dwelling in the past

I agree there still needs to be elements of slippy steep banks and cambers in world trials, but It’s the splatting up big rock steps and hopping around on the back wheel that brings more attention to